Conference at Theaterdiscounter Berlin, Wednesday, 19th February 2020, from 6pm
Films and debates of the Critics’ Week from February 20th-27th, 2020 at the Hackesche Höfe cinema, always 8pm

What are the hopes of today’s filmmakers, critics and cinephiles? What do they resent, what do they demand? In 2020, the Critics’ Week is refusing to choose a theme for the opening conference. Instead, we’re inviting friends old and new to voice their concerns, to engage in discussion and find allies. Be it against the right wing and censorship, or in favour of a global cinephilia – what we’re after is differentiation, solidarity and passionate debate. We want to place side by side that which is usually kept apart. Not least, this means reflecting on what it means to perceive a problem as belonging to “others”. Against the background of a Berlinale that, under new leadership, has to figure itself out anew, we explore the film culture dynamics that surround us.

The conference is as polyphonic as its participants. Here’s a first peek at some of our confirmed guests: Franz Müller argues in favour of opening German cinema up to other realities of experience; the film collective Altyazi discusses the fight against (self-)censorship; Girish Shambu champions a left-wing cinephilia; Evi Stamou, Marianna Kaplatzi, Aleksandra Milovanović, Branka Pavlović and Oliver Bassemir reflect on political cinema within a cinematic landscape whose borders are dissolving. The conference opens with a workshop on opposing right-wing influence in the cinema.

The film director Franz Müller, one of the editors of the magazine “Revolver”, wrote a blog post shortly after the last Berlinale about German cinema’s insulation from realities of experience other than those of the filmmakers themselves: “I have experienced a tendency towards seclusion and self-centredness, which I want to talk about. Especially with regards to social class, in recent years there have been more and more films concerned with themselves and turned away from others, and I think this is simply terrible because it depicts what already bothers me about a world in which more and more areas of experience are being steered (more or less gently) by the capitalist software, which unfortunately runs very smoothly on our human hardware.” The discussion quickly ebbed away – we take it as a starting point for a reconsideration of filmic practice in Germany.

About dangerous visibility and speaking bans

Members of the film collective Altyazi from Turkey ask themselves what the deal is with cinema and politics in their country. The group self-publishes a bimonthly magazine of film criticism and organises cinema screenings and events, intending to bolster the self-confidence of the independent Turkish film scene. Besides spreading knowledge, the group is especially concerned with facilitating encounters – because a free film culture is the joint responsibility of the audience, readers and producers. A workshop discussion with Senem Aytaç and members of the group will focus on film criticism’s existing and potential role within this context, positing criticism as a method of raising awareness and a collective objection against (self-)censorship. How do social tensions in Turkey influence cinema and criticism?

About a new cinephilia

The American film critic and blogger Girish Shambu recently wrote a manifesto for the magazine “Film Quarterly”. The focus is on the notion of a contemporary, left-wing cinephilia. Shambu calls for the recognition of critically educated movements within film culture and rejects a purely aesthetically-oriented, male auteur-centred, apolitical love of film: “You shall know the old cinephilia by the sounds of its worrying: film culture these days is ‘too PC,’ too ‘morality driven,’ and ‘all about identity politics.’ Supposedly (…) the community of cinema lovers is no longer unified the way it once (allegedly) was. For the new cinephilia, however, this unity of film culture is a figment of nostalgic fantasy, a fiction propagated and sustained by the imposition of a false universalism.”

One space is dedicated to borderless cinema: filmmaker and video artist Evi Stamou and film curator Marianna Kaplatzi, representing the collective “Balkan Can Kino” from Athens, report on the possibilities offered by the operation of a self-organised cinema. Aleksandra Milovanović (University of Arts, Belgrade) and Branka Pavlović (filmmaker, video artist) use scientific tools to investigate how the “Free Zone Belgrade Human Rights Film Festival” has, through centralised and decentralised forms of film festival operation, managed to develop and shape an activist position over the course of 15 years. The video artist Oliver Bassemir brings his “Cinephilic Germ Cell” from Hamburg: under this name, he appears in regular film programmes to question the meaning of “political architecture” with regards to the cinema hall.

About cinema and the right wing

Before the conference is after the conference. Before starting, we will host a workshop together with participants in the political cinema scene. It will address an issue that came up again and again during the conception of the conference and that will remain central throughout: in the here and now, how do conservative and extreme right-wing party politics intervene in cinema culture? How can influence be rendered visible? Which actors play a role in this? Which aesthetic practices and work methods engender forms of resistance? We assemble the most urgent ideas that reached us and form work groups. “Cinema plural” offers spaces to launch initiatives, to elaborate and concretise impulses, and to facilitate alliances. The first panel discussion of the evening will be dedicated to presenting and debating the results. Perhaps then it will be clearer what the following means: film against the right-wing.

The conference of the 6th Critics’ Week will take place on 19 February from 6pm at Theaterdiscounter Berlin. The workshop on opposing right-wing influence in cinema will begin at 3:30pm and is aimed at a specialist audience, who are requested to register their participation and decide on their focus of work in advance.

The Critics’ Week has once again borrowed a film still for its poster campaign, so as to regard it anew outside of the cinema. The pariah from Brian De Palma’s “Carrie” (1976) is cast inside an unexpected symmetry, as if the film’s Other were looking at itself. For as long as horror films have existed, culture’s subconscious has regularly and violently come to the surface, raising questions about the forces that originally contributed to its suppression. We hope that at the cinema, the truth will come to light. 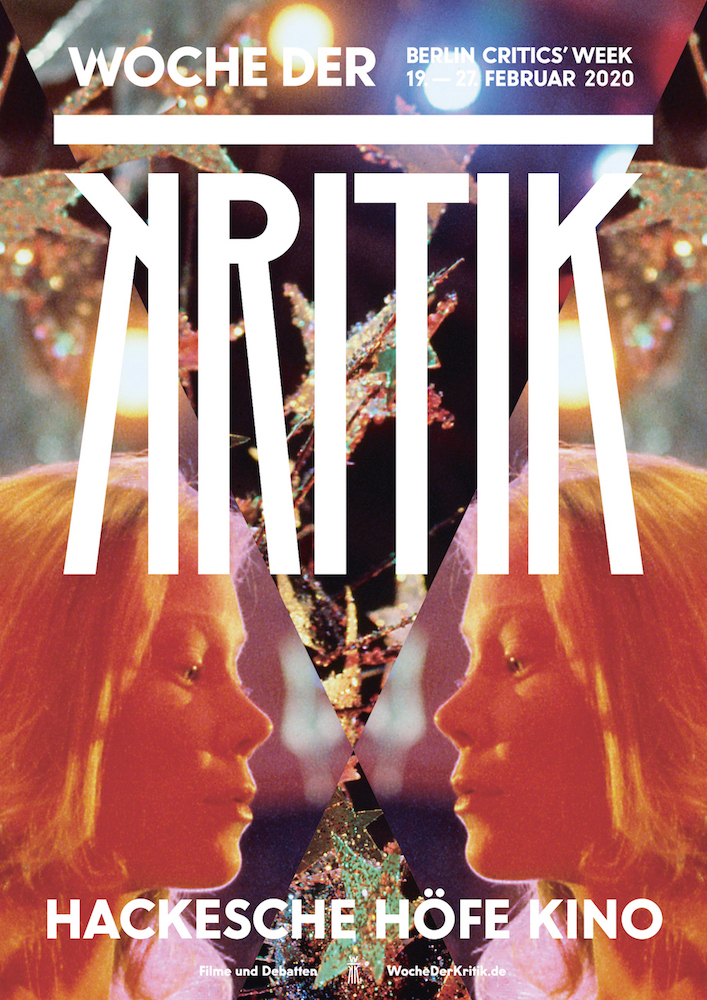 Previous Post Erste Filme der 6. Woche der Kritik
Next Post Blog #9/19 - Es gibt nichts zu erzählen
Back to Posts
By continuing to browse the site you are agreeing to our use of cookies.