By Anuj Malhotra
As a response to the program ‘The Proof Is in the Pudding’. A video of the debate can be found here
. 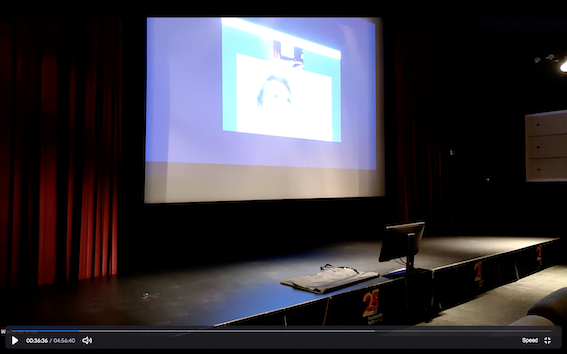 I was wondering if one can screenshot their own reflection in the screen of the device they use. Merely two hundred kilometres from where I live, seers trap spirits of rogue djinns in mud decanters – I see the contours of my dark facsimile in the glass of my phone, and the rascal eludes me; slippery spectre, ungraspable.

I recently came across the work of Navtej Johar who identifies himself as an exponent of Bharatnatyam and an urban activist. A lot of people wonder about how the two intersect, and he is amused, since the answer is so obvious to him: both place the intrinsic needs of the soma at the centre of their discourse. Johar parries his crusade further and laments the perpetual ideological burden culture places upon the material of the human body.

Amos Borchert’s email came in with the link to the video recording of The Proof Is in the Pudding, and it carried an instruction: “…the debate begins at 3:19:00.” I nearly fell out of my chair, as I thought of the Punjabi joke when the groom’s party takes too long to reach the venue of the wedding: “To wait a few hours to attend a wedding that will take a few minutes.” The joke is way more pungent in the original language, but this is the bane of contemporary conversation: we record fast, and transcoding can take longer.

(I have littered this piece with grabs from the initial one hundred and ninety nine minutes of the video shared with me – it is an incredible tapestry of non-action; a landfill of digital debris; the banal image of a wall and the poetry that results from it; its is-ness and the wonder it evokes.) 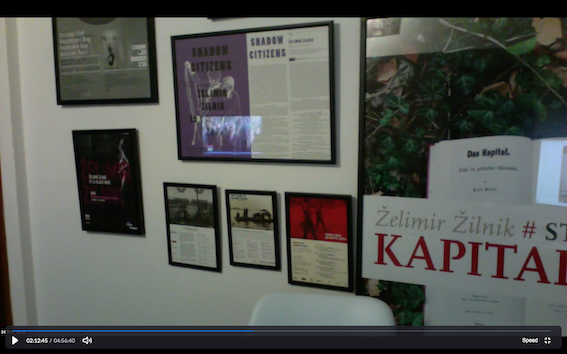 I sense reluctance to talk of images directly, to assume an analytical posture. It is true that the two films evoke within me a surf of distinct physiological responses, but these feel so intimate that to describe them may erect fences between my body and me. I want to now remain careful and not use criticism to fix the unfixable, to resolve enigmas, to trap sinuous experiences. I notice how both films are permeated by a desire to render the indexical mysterious. Triple-Chaser (2019) is particularly interesting, for it is a film in a state not merely of becoming, but also of processing. Its runtime is also the record of a daring escape – the fugitive video export outruns the plans its producers had for it. Forensic Architecture, the group responsible for the final composite, employ a grammar presenting distinct images as specific totems – they are what they are, and they exist alongside captions. At one point in the short, the group begins to describe their effort to establish a museum of imminent memes, as they solicit from the public images of the titular grenade and render these then as a layout of exhibits from a fashion catalogue: a neat grid, organised, very useful. The purpose of this exercise is to teach a machine to recognise the occurrences of these grenades within an image, to throw their contours into sharp relief against backgrounds they do not belong to.

Befuddled, Eyal Weizman, the founder of Forensic Architecture, asks the curators of the Critics’ Week: “Why did you place our films together?” The question will not be answered until much later in the debate, though, when the disembodied, off-screen voice of a perceptive audience member organises a Wordle of keywords that are applicable to both titles. The filmmakers marvel at the associations this viewer locates, yet I am still stuck with the existential rupture expressed within Weizman’s question. It isn’t that he does not like Rights of Man and would not have Forensic Architecture’s work showcased in its vicinity (on the contrary, he remarks “a colourful film, very joyous, very happy”), but instead that it does not belong to the category he has established for the direct, investigative art his group fabricates. Juan Rodrigáñez takes the bait: “I know, I did not produce a desktop film.”

Rodrigáñez follows a dramatic troupe that has stationed its travelling convoy on the grounds of a Castilian village. They rehearse; their characters collapse into their beings; there is a transcendental sequence with a pretend-bear and some cultural commentary. A sequence stands out to me, though, for how it underlines the removal of the troupe figures from the town – Rodrigáñez films them in a series of static, unbroken shots where they walk its bylanes, around its corners, in its residential area, by the curb. Later, a public service announcement advertising the play as tonight’s event looms over the landscape of the town – the antiquated nature of this play and its irrelevance are bevelled further. 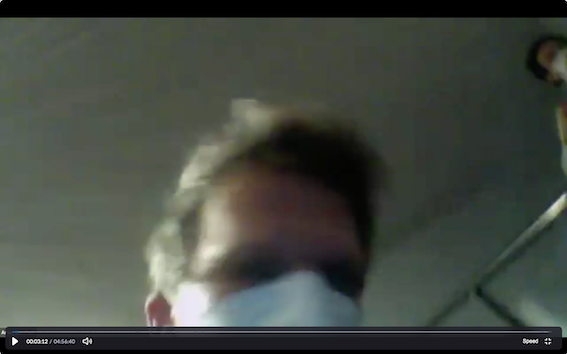 Both Triple-Chaser and Rights of Man feature at their core absurd objects that proliferate a landscape where they do not turn up naturally, the leftover viscera of a performance imposed by outside forces: tear-gas grenades (in the former), the bodies of the actors themselves (in the latter). By the end, these objects would become memes and attain a certain virality.

(I am writing a piece that may collapse onto itself. My reluctance to talk of the images in these films, as if they exist outside of me, is due to the perpetual gap between what they deign to tell us and how they feel. It may be that the project of criticism is after all to install a site where these two realms collide: the index yields the poem, the poem – the index.)

I feel my curiosity rise when Rodrigáñez is asked about a so-called Institute of Illiterate Art he established in the country he comes from. This points us in a new direction – the filmmaker emphasises his need to “avert discourse,” but then withdraws from the need to institutionalise his own dissent. This feels accurate to me, for while one can travel from a knowing to a conscious naivety, one cannot revel in a vulgar knowing of their own naivety. There is a fundamental hypocrisy that he bypasses, and I am grateful. Later on, Weizman mentions how the title of Rodrigáñez’s film had confused him: “When I saw the opening image of a noose in a darkly lit warehouse with the title superimposed over it, I thought that yours is a film about human rights in Spain.” Rodrigáñez offers his own semantic takedown: “I liked your film, but I could not understand much. It is in English.”

Rocco, a member of the troupe in Rights of Man, is touted for his abilities as a mimic. Throughout the film, his gift is abused by his peers who do not include him in creative discussions, or provide him with any real lines – instead, he is perceived as a freak without agency. Closer to the end of the film, two actresses from the troupe command him to perform a carousel of mimicries for their own entertainment. They shout a word at him, and he tries to inhabit a bland label: “a fish,” “a Japanese fisherman,” “a Butoh performer,” “a wet shirt,” and, finally, “a dead man.” We realise, however, that Rocco’s abilities as a mimic are at best mediocre, and while he tries his best to fit into a preordained box, he ends up disrupting the signifier (in this, he seems nothing like a wet shirt, nothing like a fisherman, and so on). In Triple-Chaser, a man roams around a public place and snaps photographs with his mobile phone when, suddenly, the bullet from a sniper hits him. Inside of the cinematic image, a man becomes a protester only when he is shot in the leg. I suppose criticism can reside within this crevice of non-knowledge – the gap between our theoretical imagination of a word and its actual reality. Both titles construct a similar monument to misdirections; as a character notes in Rights of Man, it is “more about the body, less about the concept.” 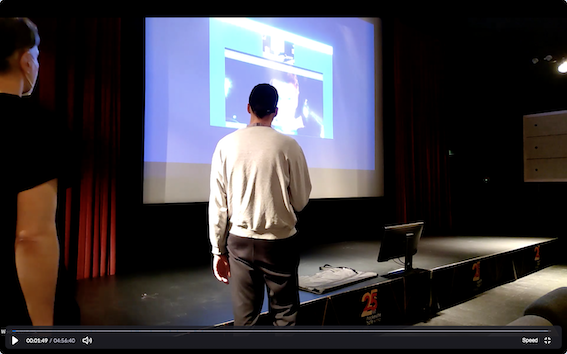 When I went through a breakup two years ago, I started to visit a number of relationship forums. Desperate and with little agency, I scrolled to the very final page of some monumental archive of emotional injury. The first message in the forum, posted in 2001, was about a college student lamenting the seeming abandonment by a girl they “would die without.” I began to wonder about the anonymous poster, about what may have become of them, and whether the severance, from two decades ago, was still as relevant to them as it seemed in the post. I concluded that, as individuals do, they would have moved on. Meanwhile, the post in itself had by now become autonomous of the individual who wrote it – a wound without a body, adrift in this permanent sea of misery.

At some point in the debate, Weizman and Rodrigáñez start to discuss the utility of art, or of the objects it yields. Weizman comments how he had contemplated withdrawing Triple-Chaser from circulation, since its purpose was “bound in time,” its images now being an anachronism. He mentions filmmaker Laura Poitras and her contribution to the film: “Her participation meant that the film suddenly began to look like a work of art.” One can enjoy the clear distinction as it exists for him, and investigate it further, for example the images of the grenade placed against random “patterns off the Internet”.  The same goes for the postcards from the in-between in Rights of Man: a tree in the wind, a building against the sky, a winding road, the open field. These are junctions in the respective films where the discourse collapses and a certain illiteracy is restored, formless images that exist on the shores of consciousness. There is no utility to them except – as with the post about the heartbreak from twenty years ago – they demonstrate that regardless of anything, life goes on.

Vorheriger Beitrag Blog #8/22 Uncommon Language?
Nächster Beitrag Blog #6/22 My Own Private Berlinale
Zurück zu den Beiträgen
By continuing to browse the site you are agreeing to our use of cookies.