The historian Rick Perlstein once said that, after signing up for the newsletters of many right-wing websites for research, he began to be inundated with e-mails promising miracle cures for common illnesses and paranoid intimations of the imminent end-days. He was startled by the ease with which the strident voices of reaction that so persuasively argued for free enterprise and against social progress morphed into mouthpieces for the advertisers of snake-oil remedies, into religious clerics denouncing opposition politicians as Satanists or child molesters. He began to understand in some small way the engine that drives forces of reaction in the United States. For Perlstein, a Richard Nixon scholar, consumerism and paranoia are not so easily separated.

In The Big House, which just had its premiere at the Woche der Kritik alongside the two-minute 2016. Oktober 8, the largest football stadium in the United States becomes a kind of petri dish in which this comingling of the political and the social synthesises and then festers. Though the film is cool-headed and clear-eyed, never deviating from its basic constitution or reaching for statements beyond its grasp (“indirect cinema” was the phrase used by critic Elena Meilicke in the post-screening discussion) there’s something confrontational about the endless scenes of pomp and pageantry, about the overload of processed images that is this panorama of Michigan Stadium. When the film is inside the place, it’s hard to spot a single image that doesn’t depict something for sale. It might be something artificial—like the fake smiles of cheerleaders—or something in the process of being turned into a commodity, like the game itself, never the subject of the film but definitely of serious interest to the many long, probing camera lenses jutting out from the sidelines. And the film depicts a world ostensibly of leisure that shares an uncomfortable proximity with religiosity and partisanship, whether in the ostentatious pro-Trump displays that adorn the car parks outside the stadium, the obscenely paranoid anti-Hillary posters, or the dozens of street preachers who beckon to the crowds of drunken football fans to join them in soapbox salvation. 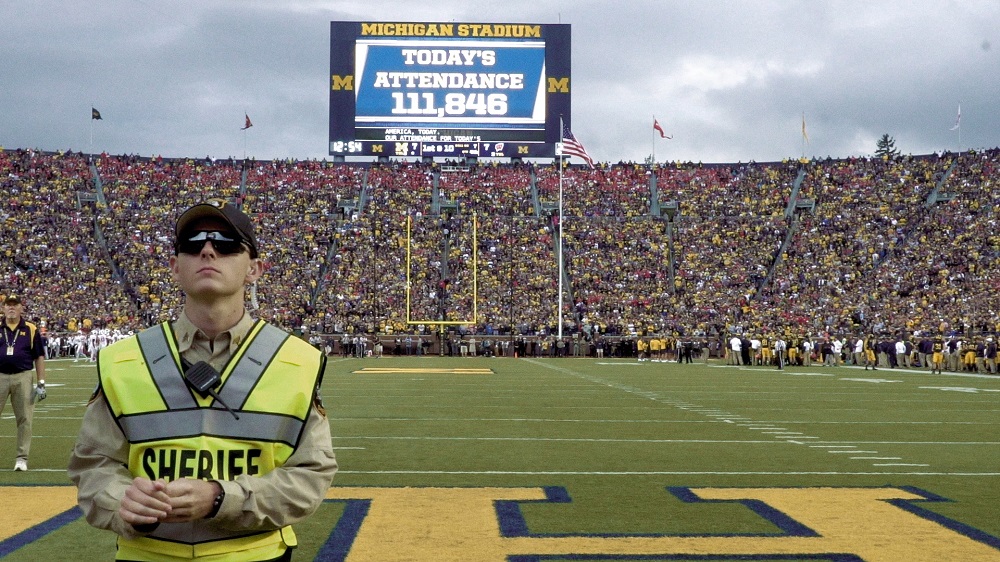 The unique circumstances of the movie’s production make it an interesting choice for this programme, which is titled “Opening Politics.” It was developed at Michigan University with a group of students, two lecturers, and filmmaker Kazuhiro Soda (incidentally, his fine new film Inland Sea premieres tonight at the Berlinale). The group shot five games at the stadium with dozens of cameras; Soda then edited the footage into its current form, part of his “Observational Film” series (this is #8). The question of why a film whose politics is engrained rather than openly expressed was included under this particular banner was the subject of much discussion in the post-screening back-and-forth for audience and speakers both. Mathilde Bonnefoy, the editor of Citizenfour, a very different kind of political film, was intrigued by its inclusion. “It’s sociology. And sociology is inherently political.” The current President of the United States, who became president during the making of the film, is a spectre hanging over the film, “a shark’s fin” encircling it, to borrow Mathilde’s metaphor.

The contrast between The Big House and 2016. Oktober 8, the didactic short that played immediately afterward, was stark. In the latter, a series of news clippings are used as the basis for the image itself. In Hungarian, damaged, and flickering by before our eyes, they are inscrutable and yet have a kind of seductive, retrograde feel. Then appears a title card explaining that the movie was made in reaction to the closure of a left wing newspaper, shining a light on the circumstances around this political affront.

Juxtaposed, the films begged the question: which exactly is “open” and which, presumably, is “closed”? Is it 2016. Oktober 8, whose entire existence is justified by its political message? Or is it The Big House, in which spectacle is divested of its glittery camouflage and shown to be just that, an endless series of productions, of performances, of fake smiles and fried chicken. Remove your baseball caps for the anthem, folks. 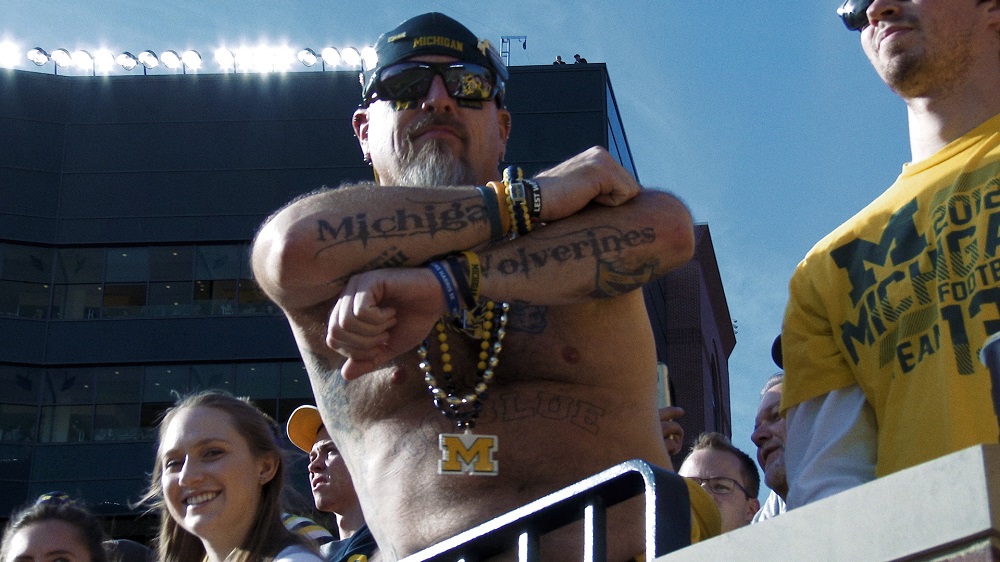 Vorheriger Beitrag Blog #4/18 - “To fight to find a place”: a short exchange about “Yet to Rule”
Nächster Beitrag Blog #2/18 - Kunst und Vertrauen
Zurück zu den Beiträgen
By continuing to browse the site you are agreeing to our use of cookies.