Invisible structures, paradoxical symptoms, affects and the place of the audience: Before meeting at Berlin Critics’ Week to debate together on Saturday, February 17, we invited Agnès Godard, Marie-Luise Angerer and the director of “Yet to Rule”, Mihaela Popescu, to exchange on some of the aesthetic and political questions raised by the film. 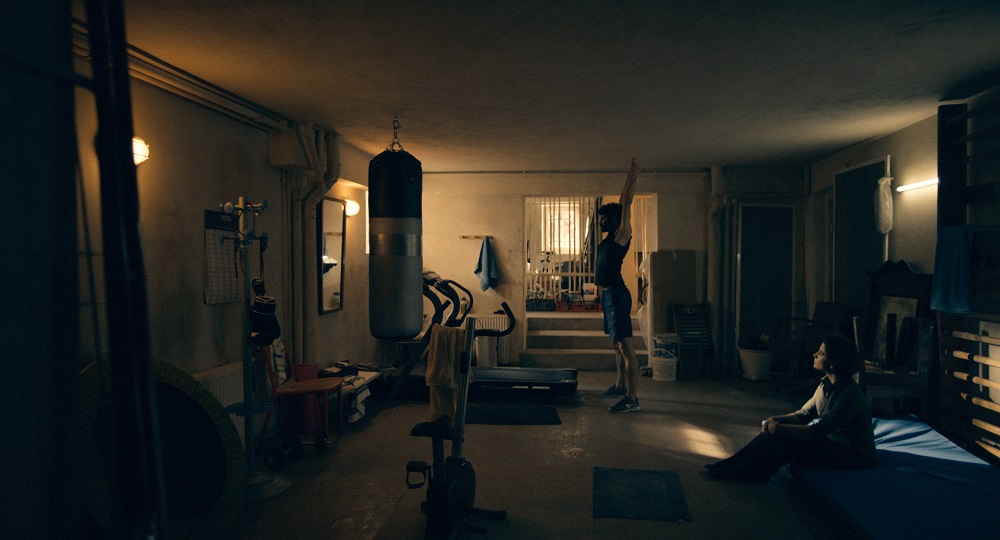 Frédéric Jaeger: It’s easily considered a contradiction: an abstract structure and a concrete sensuality. In Yet to Rule, these dimensions are tied to one another. From the bedroom to the courtroom and back, the surreal journey we embark on by following the protagonists is also a discovery of structures – both psychological and sociological – between genders and between different positions of power and powerlessness in society. From your perspective, what is the relation between these two dimensions: the structural and the sensual (or affective)?

Agnès Godard: The film Yet to Rule proposes a cartography of a binary structure: relationships of power and domination, extended to gender relationships. Political system structure, psychological structure and film narrative structure are each functioning the same way in their respective fields: organized and working in a circle, in the logic of a closed circle within which affect hardly survives (I’d rather consider affect instead of sensuality, which seems to have been excluded). Everything seems to be under the weight of the rule. The law of the structure is prevalent. Only its operation is alive.
How does it work on the audience? Which place does it leave to the audience?
Does this rather radical choice kill everything? Or, on the contrary, does it introduce and lead the audience into a deep reflection about humanity’s perspective?
It seems to me that the challenge of the film lays in this proposition: to put the audience in an identical situation as the protagonists. The viewer will have to fight to find a place, to react to how the images look back at him/her.  So I don’t see a contradiction. I see the description of a structure in continuous work. An invisible structure? Is that the meaning of the last shots? Nobody seems to be aware of the danger… the next victims?

Marie-Luise Angerer: I would prefer to talk about a ‘sense of symptoms’ instead of a sense of structures. Symptoms, as defined in psychoanalysis, allow to live the paradox, the contradiction, as well as the suppressed, without touching on it.
The film shows a speechless guy and his depressed, very aggressive (even self-aggressive) wife in private and public spaces. The wife’s mother has a dream about her, envisioning that she will be lost soon. I’m not sure whether the ‘structures’ of the court are the same as those of their perverse sex game (him playing a dog – which, by the way, is a strong image in Eastern body art, Kuleg). Real powerlessness and so-called perverse subjectification don’t function on the same level. The opening scene leads into a direction which actually has no reference… or, alas, I can’t see it.
Where does the film point towards affective structures? Firstly, in very classical scenes: the aggressive – again, speechless – man in the kitchen, breaking his glass, which the woman has to clean up. The sister leaving the kitchen after not getting any response.
Secondly, one might argue that the lack of connection between all persons in the film acts as an affective dimension as I’ve defined it in my book, “Ecology of Affect”, namely as a connecting/disconnecting force.

Mihaela Popescu: I’m glad we’re starting with this question, because it defines the film so well. It’s true, it is abstract and concrete at the same time and this is mostly due to the way I see films. I see them as paintings in motion, as an exercise in seeing, and just like with a painting, the audience plays with the concrete and the abstract in their interpretations according to their own needs and internal logic. I welcome the two responses, because they reflect very well this binary characteristic of the film. You do see a concrete leash and could think of a perverse sex game with him playing a dog, which gives you a ‘sense of symptoms’ rather than an abstract structure. But you can also ask yourself why is he a judge, why is the judge playing this perverse game in public? As Agnès Godard pointed out, you can start noticing a closed circle where the law of the structure is prevalent and only its operation is alive, you can notice how the affect hardly survives in this judicial system, and start wondering more about the abstract nature, about the (in)visibility of the structure and its sense. As I said, I see it as an exercise in seeing and it really depends on the audience how they want to approach this exercise – it’s not a contradiction, it’s rather a choice. I agree with Agnès, the viewer will have to fight to find a place, to react to how the images look at him/her in reverse. 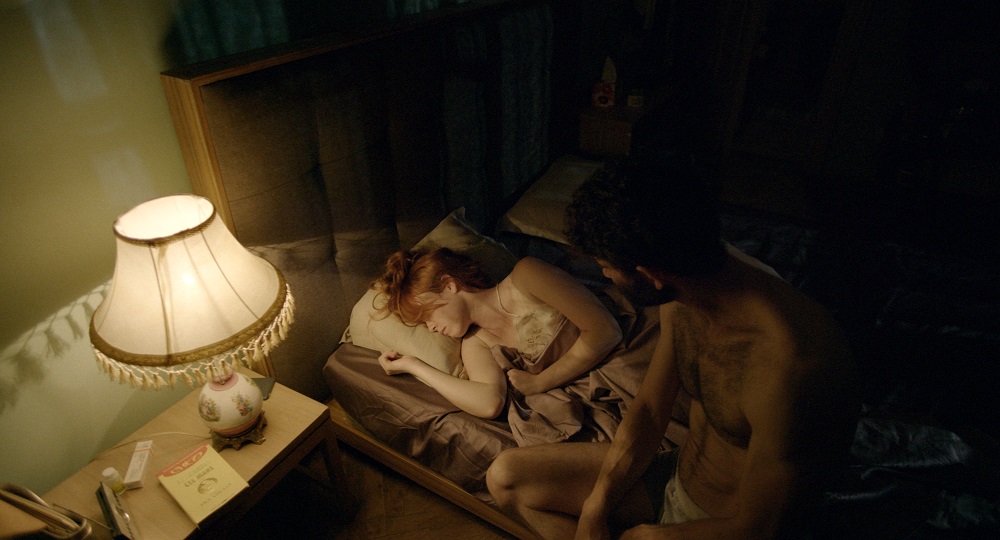 Frédéric Jaeger: Let’s use those words: symptoms and affect. And I’ll add a third one: conventions. I see social conventions at work in Yet to Rule, and also cinematic conventions, especially those of the “Romanian New Wave”, which are laid bare, played with. Of course, it will depend on the specific perspective of the audience. Since the three of you are audiences yourself, how do those conventions impact your reactions to the film, be it immediately or in retrospect?

Mihaela Popescu: If I may, I will answer by saying that it’s very ironic to talk about social conventions on the day that you have to take a flight. Social and cinematic conventions are a given, of course, and you cannot do without them. I come from Romania, from a certain background, I worked with Romanian actors and a Romanian crew in a very specific time for Romanian cinema. So it all adds up and becomes part of you, part of the film. But also, as a filmmaker, you always feel the urge to play with these conventions, challenge them in your own personal way. The film gives you the opportunity to detach yourself, to become an outsider and think about what you see.

Agnès Godard: The cinematic convention questioned in this film might be that of ‘identification’.
From the Romanian New Wave, I’ve seen a film called Police, Adjective, by Porumboiu.
It’s also quite radical, based on repetition: first it’s mute and suddenly there’s lots of words (in a long sequence in a police officer’s office). It’s also about a relationship of domination.
Identification works during the screening… as an invitation to take a position.
For Yet to Rule, time is needed, even after screening. Then comes the question: is there a possibility of identification? Or, are we (the audience) invited to watch, to share this desire to watch, to see?
Then, to go on questioning: where is the border between identification mechanisms and voyeurism?
And therefore, when and how does fiction work? And feelings? Are the protagonists of a film to be loved or hated?

Marie-Luise Angerer: I’m not sure whether identification is the right term to describe the relationship between the audience and this film: I would rather speak about dis-affection in the sense of no(n-) identification. I would argue that it’s a film which does not attract or invite the audience to take part, neither on the side of the protagonists, nor on that of one of the ‘underdogs’ shown in the court. In my eyes it’s a ‘cold’ film that – and here enters the question of conventions – follows a cinematic style I am inclined to call ‘South-eastern style’.
The very beginning of the film reminds me of art performances by Abramovic and Ulay, Oleg Kulik, etc. These have been categorized under the heading of ‘The Body in the East’. This cold style continues in the faces of the protagonists who don’t move, don’t smile, don’t react at all. The motionless faces correspond to the zero perspective of the state apparatus and thus follow a very strong ‘post-Communist’ filmic convention… as far as I can tell. 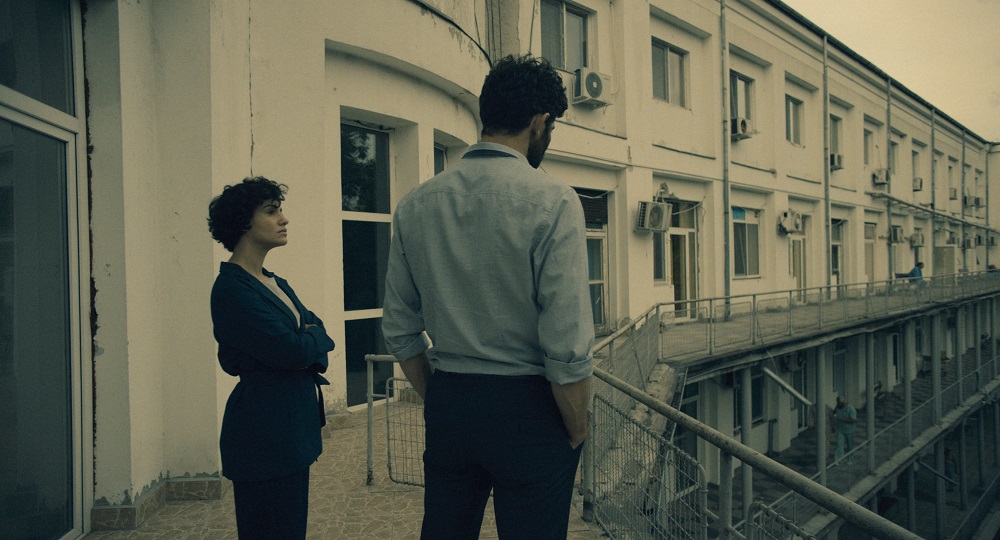 Vorheriger Beitrag Blog #5/18 - A Sense of Structures
Nächster Beitrag Blog #3/18 - Open for Business
Zurück zu den Beiträgen
By continuing to browse the site you are agreeing to our use of cookies.