How do you position yourself watching a film like Yet to Rule? This was perhaps the crucial question left hanging after the world premiere of Romanian writer-director Mihaela Popescu’s debut feature at the Woche der Kritik on Saturday night. An enigmatic and muddied art of deferrals, evasions, and circular reverberations, Popescu’s is a filmmaking that privileges affect over cause, that denies audiences any clear delineation between the absurd, troubling, surreal images of Bucharest it conjures, stuck in perpetual crisis, and the documentary images of its streets that make up the final sequence.

The filmmaker herself resisted too, following the screening, quoting Francis Bacon: “If you can talk about it, why paint?” But critics have this pesky penchant for picking films apart, for trying to make sense of a whole from disparate parts. As moderator Frédéric Jaeger commented, opening the discussion: “This is a film of contrasts, surprises, things that contradict; the film give us to the option to be inside a paradox.” While honouring the film’s resistance to giving viewers any easy answers, Jaeger said, “This is the perplexity we want to share and debate.” 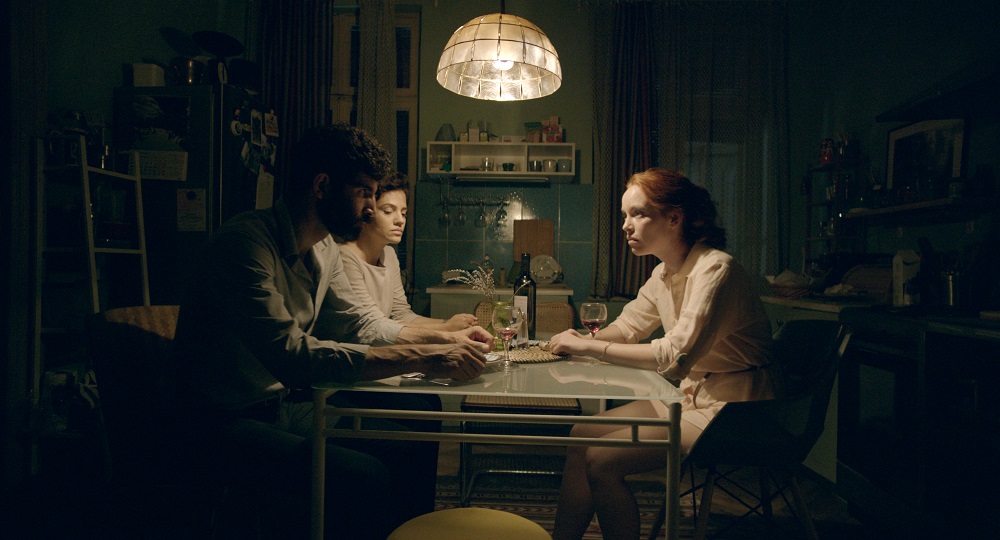 In the opening scene, a bearded 40-year-old man (Cuzin Toma) is led about on a leash, then unbridled in the park like a pet dog and set off jogging. A downtrodden and hangdog figure, his silent role is limited to violent and sexual outbursts; at one point we see him hoovering a microwave-heated dinner like a wild animal and later, instigating a drunken, stomach-turning act of marital rape. If we were allowed to get close to him at all, he could be seen, crudely, as the dark id of contemporary Romania, or as one stuck enacting clichés of an enfeebled masculinity. Forever by his side stands an assertive woman (Dorotheea Petre), his dominant rational half. She speaks for him, restrains his outbursts, and always walks a step or two ahead.

In an earlier exchange between Popescu, superstar cinematographer Agnès Godard, and film scholar and media studies professor Marie-Luise Angerer published on this blog, Angerer defined the relationship of the two protagonists as “a speechless guy and his depressed, very aggressive (even self-aggressive) wife”, whereas I read the pair as clearly two parts of the same person, enacting binary roles (“complementary”, suggested Popescu) within the individual. But so-called ‘truth’ is less important here; rather, this multiplicity of readings highlights the simple fact that to attempt to pin down the film’s surrealist logic is to be forced to participate in the kind of mechanical operations which the film parodies, perhaps even despises. Within the numerous public and social spaces of power and control – the courtroom, a nightclub, a hospital, the bedroom – punishing socio-political conventions are exposed, and pushed back against. In these rooms stand the powerful and powerless; the structures which perpetuate imbalance.

Premiering only weeks after massive anti-corruption marches in Bucharest, the film’s most powerful scenes take place inside a drab courthouse – which is where the whole idea for the film began, said Popescu. “I was struck by what I saw. I had no idea that justice looks like this,” she said. In long takes, drawn-out 360-degree slow pans circle again and again to take in bored onlookers, a napping prosecutor, those on trial, and, presiding as judge, the protagonist(s), framed by a Romanian flag and a crucifix. The courtroom action is free of dramatic flourishes: darkly absurd and automatous, it collides cold bureaucratic legalese and illiterate criminals, who can do little but shrug. As Angerer remarked, the film shows up language to be another system of control.

The crimes on trial encompass banal petty theft of steel from a railroad through to horrific rape – true cases, said Popescu, adding ever more layers to this blend of docu-surrealism. When leaving the courtroom, the rest of the film is made up of shadowy interiors, dim lighting, shots using a 14mm lens by celebrated DOP Marius Panduru (Scarred Hearts, 2016; Police, Adjective, 2009), who also worked with Popescu on her debut short The Walk (2013).

As viewers we’re constantly displaced, forced to ask again and again: where do we place ourselves in relation to these mysterious figures? As the speeches of Yet to Rule often feel like the utterances of the walking dead – barked orders and condemnations – it is images which most powerfully structure our engagement, and perhaps offer a way into its surreal and sensual world. As Agnès Godard said in one of the discussion’s more fruitful dialogues, “The best guide, for me, when looking into the camera, to see an image or a shot, then I have only one question: ‘Do I believe in that, in what I see? For what we are looking for the film, for this sequence?’ So, this is an an expression of my faith in cinema, in cinematography, to say something, to express something… So when you are making a film, you are taking a position. This is your engagement, your responsibility.”

Vorheriger Beitrag Blog #6/18 - Humor and Fragility
Nächster Beitrag Blog #4/18 - “To fight to find a place”: a short exchange about “Yet to Rule”
Zurück zu den Beiträgen
By continuing to browse the site you are agreeing to our use of cookies.